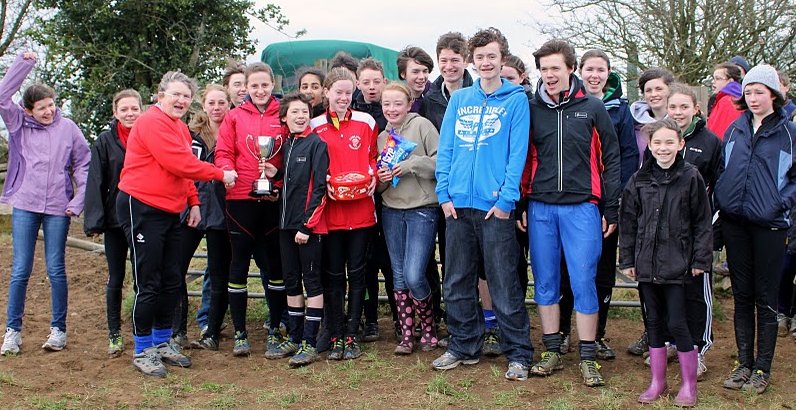 Also see Robert Lines website for a lot more photos out in the forest: http://picasaweb.google.com/orienteeringrob?showall=true

The great news from today's re-run of the 2010 YBT Final is that OD retained the trophy in a close fought competition with a total of 885 points.  Our 9 counting scores were well spread across the classes with 2 counters on Yellow, 2 on Orange, 3 on Light Green and 2 on Green.

Others who did not feature in the top 9 also played their part by finishing above opposition runners thus pushing them lower down the points table.  This applies to nearly all of our runners. We even had the luxury of not needing to count runners who had scored 90 or more points when many of our opponents needed scores with less than 80 points to make up their numbers.  So in conclusion a very good result, greatly helped by having so many juniors running for the club.

As usual we had several debutants which is great for the future.  You only have to look back over the last 5 years of results to see how people progress from beginners to "top 9" points scorers in a very short time.  Without this continual input of new runners we would not have any chance of continuing to challenge for this trophy in a few years time.

It's also interesting to see again that several of our counting runners have come into the sport through their schools rather than being blessed (or otherwise) with orienteering parents.  No club can survive at the top without a regular stream of new members and the input from local schools to OD is invaluable.

As always we will be losing some juniors as they become too old.  This was Sophie's last year so thanks to her for coming back from university to run for us again, and step forward the next generation.

I really want to thank everyone who turned out to represent their club and to all the parents who gave up their time today.  And special thanks to those who tried to hold onto the club tents as the wind gusted without respite.

I have a few maps left over so please email me if you are missing a map.  Similarly I have several YBT Certificates to hand out to everyone who ran today so again email me if you have not had yours.

The full results are now available on the HOC website at: http://www.harlequins.org.uk/results/20110206_C3.htm

The top 5 teams results are shown below:

Sunday 10th October 2010. OD juniors took on Happy Herts (HH), Thames Valley (TVOC) and Berkshire Orienteers (BKO) in a YBT qualifying event and won handsomely.  HH also progressed to the YBT Final on Sunday 5th December at Hawkbatch in the Wyre Forest near Bewdley - so conveniently local for us.  Follow this link for more details:

We scored 895 points with 4 1st places and 5 2nd places.  Lots of other ODs finished in the top 10 so it was a great result for the club and for many individuals. Well done to all and thanks for turning out to support your club!  Thanks also to the Elkingtons for taking a minibus to the event and to the other parents who drove down to Bracknell today.

I want to point out the importance of the contributions from everyone else too; because all those 3rd, 4th, 5th, 6th & 7th places push the opposition runners further down the results table and that can really make the difference.  In the Final we are unlikely to have it so easy and denying the opposition points will be as important as scoring to our maximum potential.  To that end I hope we get a massive turn-out to flood the field and improve our chances of retaining the Yvette Baker Trophy.

Finally, it is worth noting that those who scored heavily this year did not necessarily do so last year.  That is the nature of progression.  Everyone has to start somewhere.  For some, events like this are one of their first experiences of orienteering in a real forest and it's a learning curve.  This  year's newcomers will be next year's solid performers and can be major points scorers the year after.  So it didn't work for you this year - don't worry - it's just another step on the ladder that we all take.

OD juniors with top 10 finishes were:

5th September 2010: the "Wizards of OD" are presented with the age-handicapped Joan George Trophy by Brigadier A P Williams OBE, Commander 49 (East) Brigade at Chetwynd Barracks near Nottingham. 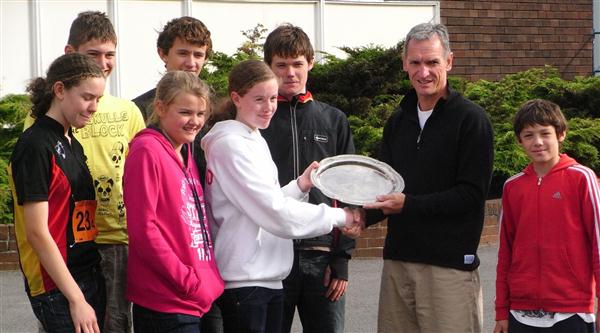 25 teams competed in this year's Peter Palmer Relays, with those teams whose combined age summed to 90 years or less also being eligible to compete for the Joan George Trophy. The "Wizards of OD" finished as runners up in the main competition to SYO as well as winning the Joan George Trophy.  Sadly the other OD team "OD Warlocks" were disqualified due to a mis-punch, which masks the fact that  some good times were posted by runners in the team (Helen Elkington, Alastair Gardner, Aimee Morse, Michael Hanson-Morris, Stephen Elkington, Gursimran Kullar and Calum Barnetson).

Matt Elkington led off for the Wizards in the mass start, in the company of some of the top juniors in the country, and came back in a very good 8th place. Harrison McCartney picked up 3 places as night turned into day and Hamish Rogers lifted us to 2nd place, around 6 minutes behind the leaders and eventual winners SYO, and just ahead of NOC after leg 3.  Rachel Emmerson on leg 4 and Julie Emmerson and Zoe Nicolson on leg 5 maintained our position leaving Will Gardner to embark on the final leg well clear of the 3rd placed team (now SARUM) but with little chance of overhauling SYO (although he did pull back over a minute).

This was really good performance, not only to win the Joan George Trophy but also to finish second in the overall standings, and the team members should feel very proud of their achievement.  Commiserations to the "OD Warlocks", but it's a harsh fact that it only takes 1 mis-punch or 1 incorrect control to be disqualified.  Other teams were also disqualified today; it has happened in previous years and it will happen to someone next year too.  It's an important lesson we should all take note of: check your control codes EVERY time and ALWAYS make sure your SI or EMIT punch is registered!

The full results are available on Mike Napier's website:
http://www.cix.co.uk/~neper/ppr2010/index.htm

and some good pictures at Rob Lines website:
http://picasaweb.google.co.uk/orienteeringrob